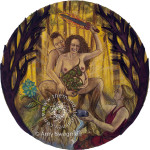 This piece is a collaboration with another mama to create an image she can reflect on when planning her VBAC.

I want to first put a disclaimer here that I am not trying to say that every woman who has had a cesarean should VBAC or that if you tried to VBAC and it didn’t happen that this was a failure in any way. Also this piece is very earthy in a way that the cesarean piece was not and this is not to say that women who have cesareans aren’t earthy (cesareans are just by definition sterile). Also, some women have had traumatic VBACs. This is just a picture of what an “ideal” VBAC would be for my friend.

Some people might find it odd that she is carrying a flaming sword. This was an image that I kept coming back to and stems from the Buddha Manjushri, the Buddha of Wisdom (I’ve included a pic in this album). He carries a flaming sword of truth. My friend was at first wary of this imagery but then said she really liked it because before someone else was holding the scalpel, but now she is holding that power. Also when thinking of the preparation that goes into a VBAC i know that many women are very conscientious to gather all the research and studies they can.

She is confident, grounded, and safe in her grove of redwood trees.  Redwoods are known for being strong and resistant to disease.  I chose these trees because women who VBAC often take great care as to where they choose to give birth, that that place supports practices that encourage VBAC.

Her birth attendant is off to one side, always there encouraging but not taking her power away from her. Her partner is behind her supporting her as well and everyone is trying to tune into her needs as best they can.

At the center of her belly is a koru. A koru is a Maori term for a fern unfurling. It starts at her heart and fills her belly. This symbolizes the inward journey women often go through to VBAC.

Also both the koru and the flower represent an opening and unfurling physically. Many women who have cesareans never made it to 10 cm and that is a fear for them when preparing to VBAC. So this essence of “opening” is an important element.

Her scar is a rainbow that radiates strong energy. For many women they are told the main reason they shouldn’t VBAC is because of uterine rupture, even though the chance is so so small. This is to represent the physical healing of the scar.