Adrian Baker, professional artist and mother of three, has been painting and exhibiting her work since 1980, as well as working as a portraitist, muralist and art teacher. Career highlights include a commissioned portrait of Prime Minister Pierre Trudeau 1984, paintings featured on the covers of Reader’s Digest Magazine and The Canadian Medical Journal  in 1996, and The Practicing Midwife (U.K.) in 2011. She was chosen as a finalist in the Kingston Prize for Contemporary Canadian Portraiture in both 2005 an 2007. In 2009 Adrian was selected to be artist-in-residence in Bermuda, followed by a very successful solo exhibition of her work at the Bermuda Masterworks Museum.

Adrian’s work has been exhibited in galleries in Canada and internationally, in group shows as well as solo exhibitions. Her most recent solo exhibit was ‘Labours of Love’ at Dale Smith Gallery, Ottawa, in 2009. This was a fundraiser she organized for the White Ribbon Alliance for Safe Motherhood, an international charity working to combat high rates of maternal mortality. In 2010 one of her paintings was selected for an international juried show ‘Mothers’ in Chicago. Adrian spent the first four months of 2011 volunteering at an orphanage in southern India, along with her husband and daughter.

Adrian’s work can be found in numerous public and private collections across Canada, the USA, and abroad. Her work can be viewed at www.adrianbakerart.com. 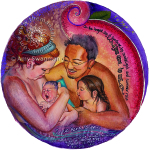 Here is a piece I did for my second daughter’s birth.  She was born in the water at Mountain Midwifery Birth Center.  Her birth was amazing!  If you’d like to read all about her birth story you can visit my sister doula website here.  You can also watch a video of her birth below:

"Winter Tree"- in Memory of Rowan who was lost

I didn’t really go into this with the intention of it being “miscarriage art.” The idea of birth art and/or art therapy had come up a lot during the last few months of the year, both from friends and my local ICAN group. I’d been really thinking about it, and decided to get some watercolors and try my hand at it. This was my first ever actual painting, let alone with watercolor.

I realized afterward that the painting really represented my miscarriage. The tree is dead, in the middle of winter – no leaves, with snowflakes surrounding it. There is a blue background, and the tree is uprooted, which seemed to imply the fact that my baby was no longer “rooted” in my womb.
I really want to work on some other ideas I have for art about miscarriage and baby loss. One painting that I’ve started is of a pregnant woman with a skull & crossbones flag across her belly. Whether I like it or not, based on my history of loss, it’s sometimes hard for me to view my womb as a safe place for my baby, and sometimes it feels like whenever I am pregnant, my body is going to sabotage it, like pirates swooping in a killing everything.
Anyway, this painting that I’m sending you is titled “Winter Tree.” My husband and I decided to name our miscarried child Rowan. We didn’t know if it was a girl or boy, and neither of us had any particular inclination one way or another, so we chose something gender neutral.
– Amy Lutes
Standard 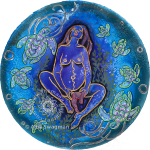 A friend of mine who had a vaginal breech birth saw Delphinius Birth and wanted one with turtles. 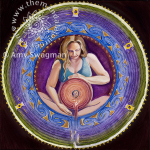 In this piece I show mom and baby in their own labyrinths, separate and different though all interconnected.  The wavelike pattern the path takes symbolizes the surges or contractions.  I wanted to represent how the mother and baby’s journeys are connected, both are experiencing the rolling surges, both are participating and moving closer to meeting one another. 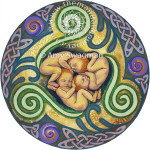 (Click image to enlarge)
12×12 inches
Pen and ink, watercolor, and colored pencil on Illustration Board

These babes form a Triskele, a predominantly Celtic symbol that represents either the essence of the trinity or the cycle of life, Mother, Maiden, and Crone.  I thought it would be neat to bring the two together, baby and mother symbol.

These babes were inspired by the beautiful photography of Carrie Sandoval of San Diego, CA.  To view more of her stunning work please visit her website here. 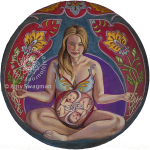 This is a piece of a mama pregnant with twins, nurturing them like she’s nurturing the flowers growing from her palms.

I know that only monoamniotic twins develop in the same sac so that their cords would intertwine, but I kind of liked the symbolism that all three of them are intricately connected.  Also it looks like a Celtic knot!